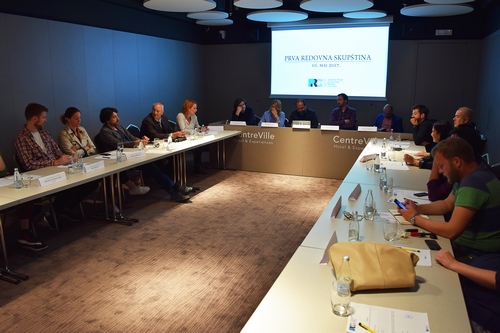 Last night in Podgorica, first regular assembly of the Montenegrin Association of Film Producers and Directors was held. Seventeen directors and producers attended the meeting, and on this occasion, by the secret vote, they chose the Board of Directors as well as the president of the Association.

Over the past couple of years, it is stated in the elaboration, various initiatives had been started for joining together main staples of the film projects into professional association which would be representative and which would deal with the rights of film workers, but would also create an atmosphere in which film production in Montenegro would be facilitated, as well as legislation and series of other issues. But up until now, such an association hasn’t been set in motion.

“After serious analysis, we’ve come to the conclusion that professional association that seems to us the most convenient and the most representative, but also the most efficient is the very association of filmmakers whose main vocation is directly linked to the filmmaking, and who are publicly seen as film authors. After the analysis of the bigger part of the film projects that came to life in the last 14 years in Montenegro, it is safe to say that directors and producers exclusively are the authors who, from the beginning until the end, are dedicated to the project, and on the other hand they are the first ones to relinquish or the last ones to feel even the smallest financial benefits, in other words, they are the absolute bearers of the project, with complete creative, financial and every other responsibility.” – It is stated in the announcement.